skip to main | skip to sidebar

TREELINES is an installation of ink, watercolor and gouache drawings of Aspen trees that chronicle an experience of a walk through an Aspen grove. Meredeth Nemirov approaches the work through the door of Asian philosophy that that references the sensitivity to the all-encompassing sweep of the seasons that formed, in part, the foundation of Japanese life and culture beginning with the establishment of Kyoto as the capital city in 794. Central to Chinese philosophy is the fundamental notion that nature and humanity are one. Traditional Chinese painting employs monochromatic linear elements and voids and depicts the preference for subject matter derived from nature. 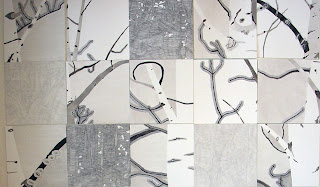 Meredith's narrowing focus has moved her work towards a certain abstraction that is informed by the patterns and linear elements employed by early cartographers to record the land. In a contradictory way, the work has expanded to include visual elements that move in and out of the environment through time and physical space. As Meredith states, "my vision for the work is to convey the idea that nature is not observed from one particular location. Nor is it fixed in time byt has an invisible and intangible aspect (beyond direct experience of the senses) related to sequential changes n cyclic patterns that suggest an underlying purpose."

Meredith received a BFA from Parsons School of Design in NYC. Awards include a Director's Grant from the Colorado Council on the Arts (CCA), the Telluride Council for Arts and Humanites Small Grants and Artist Fellowships for Residencies at the Anderson Ranch in 2005 and the Vermont Studio Center in 2010. Her work has been shown at the Brooklyn Museum, The Queens Museum, Yeshiva University Museum, and in many other group shows.
Posted by Grant Pound at 7:48 AM